The Thanksgiving holiday is best known for football, but for the first time since the Breeders’ Cup, we’ve got a full slate of racing on deck this weekend!

Here is the schedule for all graded stakes races this Thanksgiving weekend, as well as quick previews and where to get our FREE picks:

Falls City Stakes (G2) – This one has a good mix of talent, which should make for a pretty solid betting affair. The Kenny McPeek trained Envoutante loves Churchill Downs and won this race last year, with Bonny South second; both are back this year. Army Wife tries her hand against older horses for the first time.

Red Carpet Stakes (G3) – A small field of five will do battle in this race, including Luck, who should be the favorite. She was a very close second last time out in the Rodeo Drive Stakes (G1) at Santa Anita. The last time she was at Del Mar, she easily defeated allowance runners.

Comely Stakes (G3) – Army Wife and Crazy Beautiful headline this affair, with the others looking like they need to improve in order to have a shot. However, Army Wife is also entered in Thursday’s Falls City Stakes (G2) at Churchill Downs, and her running there would drastically change things in this race. Crazy Beautiful gets back to dirt after trying turf last time out.

Hollywood Turf Cup (G2) – A strong mix of talent will contest this race, including Rockemperor, who stayed in California for Chad Brown after running in the Breeders’ Cup Turf (G1). He should be tough; however, Acclimate is another Breeders’ Cup runner who might get loose on the lead in this spot. The pace will likely determine the outcome.

Long Island Stakes (G3) – Eight fillies and mares will go a marathon 1 1/2 miles on the Big A’s inner turf in this race that carries a whopping $400,000 purse. Trainer Christophe Clement would tie MacKenzie Miller for most wins in this race (5) if he found success with anyone from his triple threat of entries, which includes defending champion Mutamakina.

Golden Rod Stakes (G2) – The final Saturday of the Churchill Downs Fall Meet is devoted exclusively to juveniles, including this official prep race for fillies hoping to compete in the 2022 Kentucky Oaks (G1). Sure to attract plenty of attention is the rail-drawn Famed, who broke her maiden last out. She’ll look to carve her own path as the younger half-sister to champion colt Essential Quality.

Kentucky Jockey Club Stakes (G2) – A deep field of 14 colts will try the same 1 1/16-mile dirt distance as the Golden Rod, and some of these could mean business as they aim toward the 2022 Kentucky Derby (G1). Tiz the Bomb, runner-up in the Breeders’ Cup Juvenile Turf (G1), tries dirt for trainer Kenny McPeek, who also entered Smile Happy, a dominating debut winner at Keeneland last month.

Hollywood Derby (G1) – Chad Brown’s California assault continues Saturday as he aims to win this for the fourth time in the past six years, though he’s yet to successfully defend a title. He’ll look to back up Domestic Spending’s 2020 victory with Public Sector, a multiple graded stakes champ who shares Domestic Spending’s same ownership. Brown also entered Sifting Sands, an up-and-comer who was seventh in his graded stakes debut last time out.

Berkeley Handicap (G3) – A staple on the Northern California racing schedule, this 1 1/16-mile synthetic route routinely attracts several tough, hard-knocking horses from across the state and beyond. The local hopes are expected to rest on Camino Del Paraiso, who has won his last 4 starts at Golden Gates including the Joseph T. Grace Stakes over the same distance last time out.

Kennedy Road Stakes (G2) – Pink Lloyd, one of the Racing Dudes’ all-time favorites, will run off into retirement after making his fifth attempt in this 6-furlong synthetic sprint that he won in 2017 and 2019. He was second in 2016, missed it in 2018, and was third last year, but he’s riding a 2-win streak into his swan song. Win or lose here, Pink Lloyd will always be a champion.

Fall Highweight Handicap (G3) – A short but competitive field will contest this Thanksgiving Weekend staple held at 6 furlongs on the dirt. Chateau was pretty bad last time out in a Parx allowance, but he could turn things around over his favorite track: his Aqueduct record is 10-5-2-2, including winning the Tom Fool Handicap (G3) and finishing second in the Runhappy (G3).

Matriarch Stakes (G1) – Every year, Chad Browns sends some of his best horses still in training for this weekend at Del Mar. Will his horses continue his dominance in these spots, or will California rally and pick up a win in this race this year? Keep an eye on who the top riders – both local and national – take in this spot.

Cecil B. DeMille Stakes (G3) – The last west coast graded stakes for 2-year-olds is a mile route won in recent years by such stars as Smooth Like Strait and Analyze It. Jockey Mike Smith has won this race twice since it moved to Del Mar beginning in 2014, and while several tough east coast-based horses are expected to enter, 4 of the last 5 runnings of this race were won by locals. 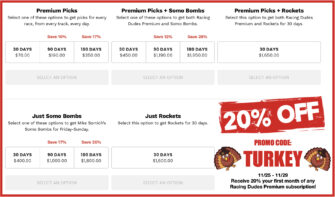 GET 20% OFF YOUR FIRST MONTH OF ALL PREMIUM SUBSCRIPTIONS! SALE ENDS MONDAY!

With Mike still on vacation, Aaron Halterman of the Racing… Read More

Welcome to the 2021 Divisional Rankings! Each week, we rank… Read More