Mike previews the 2022 Saratoga Derby (G1) at Saratoga, then gives his top picks and longshots. Top European invaders Stone Age and Nations Pride are back in American looking for revenge after failing to win the 2022 Belmont Derby (G1) last time out. Tell us YOUR thoughts in the Comments section! 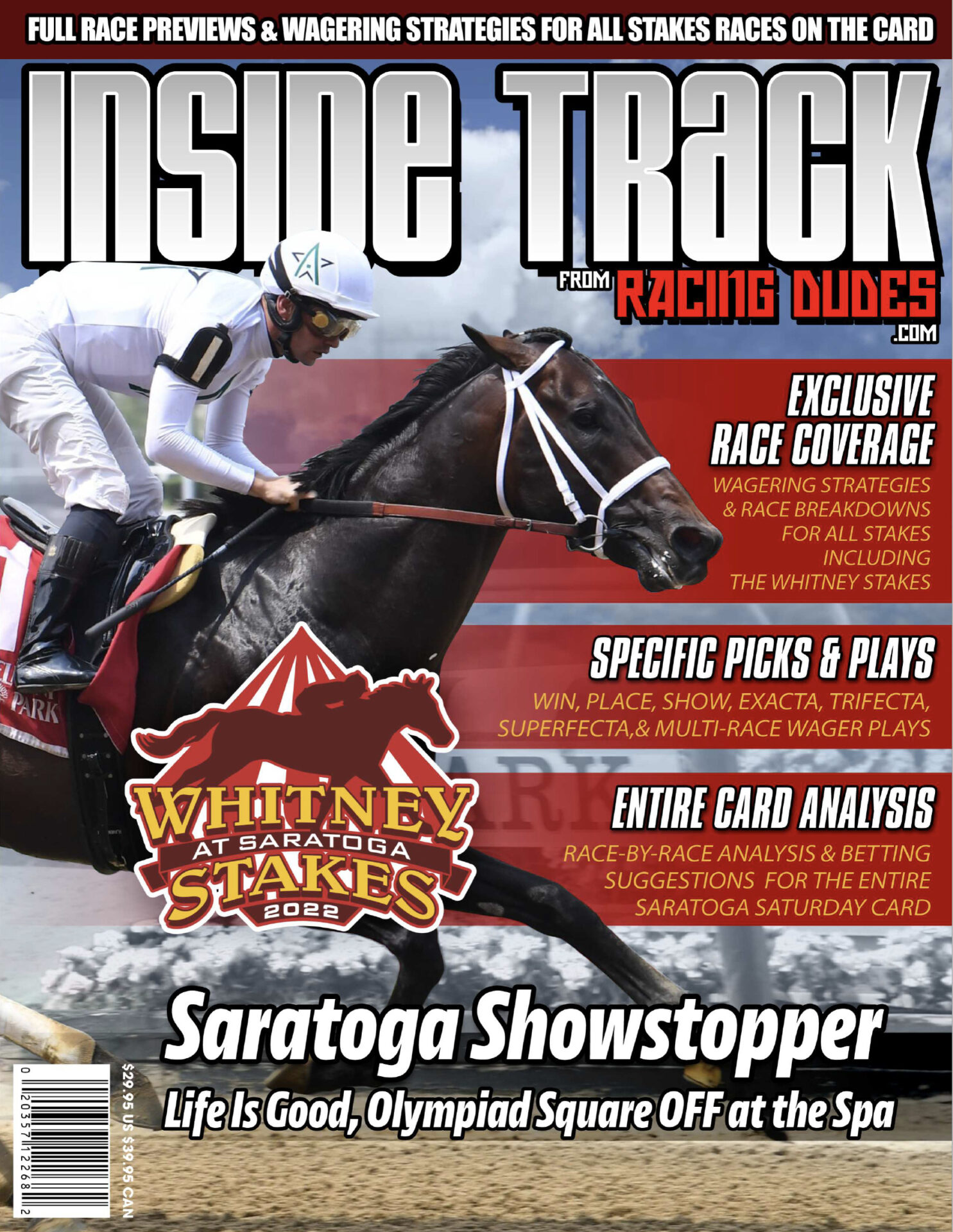 Inside Track to the 2022 Whitney Stakes

Download our MASSIVE 12-page Inside Track to the 2022 Whitney Stakes wagering guide. Features picks and analysis for every race including $1 million Whitney Stakes (G1).

The second leg of the Caesars Turf Triple series is one of three Grade 1 events Saturday, led by the Whitney at 1 1/8 miles for older horses offering an automatic berth to the Breeders’ Cup Classic on November 5 at Keeneland; along with the seven-furlong $500,000 Longines Test for sophomore fillies. Whitney Day will also include the 12-furlong Grade 2, $250,000 Glens Falls for older fillies and mares on turf, and the restricted $135,000 Fasig-Tipton Lure at 1 1/16-miles on turf for older horses.

Trained by Kenny McPeek, the multiple graded-stakes winning Classic Causeway made his turf debut a winning one in the first leg of the Caesars Turf Triple series with a gate-to-wire score last out on July 9 in the Grade 1 Caesars Belmont Derby Invitational traveling 10 furlongs over firm turf at Belmont Park.

The Giant’s Causeway chestnut was sent to post at odds of 26-1 under returning rider Julien Leparoux and dug in gamely down the lane to stave off returning European rivals Nations Pride and Stone Age in a blanket finish.

Classic Causeway, who was Grade 1-placed as a juvenile, launched his sophomore campaign with a pair of starts at Tampa Bay Downs for his former conditioner Brian Lynch, making the grade in the Grade 3 Sam F. Davis in February and following with a 2 1/2-length score in the Grade 2 Tampa Bay Derby.

He faded to 11th after setting the pace in the Grade 1 Florida Derby in April at Gulfstream Park before an off-the-board effort in the Grade 1 Kentucky Derby in May at Churchill Downs. Classic Causeway was then transferred to McPeek, finishing a good third in the Grade 3 Ohio Derby on June 25 at Thistledown before returning on two week’s rest to win the Belmont Derby.

Classic Causeway has breezed back three times over the Oklahoma training turf, including a half-mile breeze in 49.13 on July 22.

“He’s doing super. He worked great. He’s galloping great,” McPeek said. “I’m real proud of how he handled himself in the Belmont Derby and I think he’ll rate a little better in his next start. He seems to be turning off a little bit and he’s a very strong-willed horse. I’m just really glad to get a Grade 1 out of him.”

McPeek said the sharper turns at Saratoga should benefit.

“It’s a different configuration so that changes the dynamic a little bit, but he should handle it fine,” McPeek said.

WinStar Farm and Siena Farm’s Emmanuel, who was scratched from the Belmont Derby, also made his turf debut a winning one by capturing the nine-furlong Grade 2 Pennine Ridge in frontrunning fashion on June 4 at Belmont.

Pletcher said he doesn’t expect to clash with the often prominent Classic Causeway.

“He handled the mile and an eighth well in the Pennine Ridge,” Pletcher said. “He had the fractions go his way which, with Classic Causeway in here, he’s a pace factor that wasn’t in the Pennine Ridge. But he’s very tractable and doesn’t need the lead. I don’t foresee it being a problem.”

The More Than Ready bay won his first two career starts on dirt in Florida and was briefly on the Kentucky Derby trail, finishing fourth in the Grade 2 Fountain of Youth in March at Gulfstream and third in the Grade 1 Blue Grass in April at Keeneland.

Bass Racing’s Kentucky homebred Annapolis bypassed the Belmont Derby in favor of the one-mile Manila on July 4 at Belmont, rallying to a 2 3/4-length score that garnered a career-best 91 Beyer Speed Figure.

“We were really on the fence between the Manila and the Belmont Derby,” Pletcher said. “But with only one start under his belt we felt it made sense to come back and get another race into him before stretching him out. He’s trained super into this.”

The War Front bay, out of the graded-stakes winning Unbridled’s Song mare My Miss Sophia, captured the Grade 2 Pilgrim at second asking in October over the Belmont turf to conclude a perfect 2-for-2 juvenile campaign. He made his seasonal debut with a runner-up effort to longshot Wow Whata Summer in the Grade 2 Penn Mile which was contested on June 3 over extremely soft going.

The Medaglia d’Oro colt finished a close second to returning rival Sy Dog in the Grade 3 Transylvania in April at Keeneland ahead of a deep-closing third in the nine-furlong Audubon in June at Churchill. He enters from a close fourth, defeated one length, in the Belmont Derby.

“I thought he ran great in the Belmont Derby,” Pletcher said. “He’s knocked on the door and just missed a few times. “Hopefully, he can make that tiny move forward.”

Godolphin’s Irish homebred Nations Pride, a colt by Teofilo, was away slowly from post 10 under Frankie Dettori in the Belmont Derby, closing from ninth to finish just three-quarters of a length back of Classic Causeway.

Trained by Charlie Appleby, Nations Pride entered his North American debut from an eighth in the 12-furlong Group 1 Epsom Derby on June 4, five weeks after a seven-length romp over subsequent Derby runner-up Hoo Ya Mal in the Newmarket Stakes. The homebred had a four-race win streak snapped at Epsom, with his three previous wins all coming on flat courses, including a 3 1/4-length score in the 10-furlong Jumeirah Derby at Meydan in Dubai.

Nations Pride stayed in New York following the Belmont Derby in the care of travelling assistant Chris Connett and has posted four works over the Oklahoma training turf, including a six-furlong breeze in 1:15.21 in company with Grade 3 Saratoga Oaks contender With The Moonlight on Sunday.

Connett said he is hopeful Nations Pride can work out a smooth trip under William Buick from post 4.

“I just think he needs a trouble free run this time,” Connett said. “He looked like he was going to make a nice run into the home turn at Belmont and he got checked, but he still rallied and made a big effort. If he can have a clear run through, he should take some beating.”

The Galileo colt exited the outermost post 12 in the Belmont Derby under Ryan Moore, closing six wide in upper stretch to complete the trifecta.

He ran a strong second as a maiden in the Group 1 Criterium de Saint-Cloud in October before graduating in March at Navan in his seasonal debut. Stone Age followed with an eye-catching score in the Group 3 Derby Trial at Leopardstown over 10 furlongs before finishing sixth in the 12-furlong Epsom Derby as the second choice.

Stone Age, who arrived back in New York on Sunday, will leave post 10 under Hall of Famer John Velazquez.

Head of Plains Partners’ Sy Dog finished a close sixth last out in the Belmont Derby for trainer Graham Motion. The dark bay Slumber colt was angled four-wide by Manny Franco into the stretch run, but was still behind rivals and unable to make up ground while finishing 1 1/2-lengths in arrears of the winner.

“I can’t give him any excuses. I thought he ran a really good race. Manny loved him and I thought he gave him a great ride,” Motion said. “The only thing Manny said afterwards is he wished could have switched him to the outside and he might have run on a little better. He got stuck down on the inside but I can’t give it as an excuse. He wasn’t beaten very much. If he can run back to that race, he should be competitive.”

Sy Dog won his first three starts, taking the Central Park in November at Aqueduct ahead of his narrow score over Grand Sonata in the Grade 3 Transylvania. He entered the Belmont Derby from a third-place finish in the Grade 2 American Turf where he was defeated just 2 1/4 lengths by returning foe Stolen Base.

Stolen Base, trained by Mike Maker for Three Diamonds Farm and Deuce Greathouse, went into the Belmont Derby with two months between starts following his American Turf coup.

The Bodemeister bay, who is cross-entered in Friday’s Grade 2 National Museum of Racing Hall of Fame here, was a rallying second in last year’s Grade 2 Bourbon at Keeneland ahead of a seventh-place effort in the Grade 1 Breeders’ Cup Juvenile Turf. The consistent bay, who sports a ledger of 10-2-3-1 for purse earnings of $468,700, will leave post 5 in rein to Dylan Davis.

A maiden winner at fourth asking in January at Oaklawn Park, Ethereal Road ran a strong second to Un Ojo in the Grade 2 Rebel over the same course. He added additional Kentucky Derby points to his ledger with a fourth-place finish in the Grade 3 Lexington at Keeneland, but scratched from the “Run for the Roses,” allowing Rich Strike to draw in and make history. The $90,000 Keeneland September Yearling Sale purchase captured the Sir Barton two starts back at Pimlico and will now look to make the grade with a surface switch.

Harrell Ventures’ Main Event, trained by George Weaver, enjoyed a productive winter at Gulfstream Park, graduating at third asking in January ahead of a runner-up effort in the Palm Beach in March.

The Bernardini bay earned his first stakes win in the Cutler Bay in April at the Hallandale Beach oval before traveling to Kentucky to finish ninth in the Grade 2 American Turf at Churchill Downs. Last out, the $130,000 OBS Spring Sale of 2-Year-Olds in Training purchase made the grade with a frontrunning score in the nine-furlong Grade 3 Kent on July 2 at Delaware Park.

Jose Ortiz has the call from the inside post.

The Racing Dudes preview and give picks for Saturday’s $600,000… Read More

BLINKERS OFF 569: Arlington Million and Fourstardave Previews and Rapid-Fire Picks

The Racing Dudes preview and give picks for Saturday’s $600,000… Read More