ELMONT, N.Y – An accomplished field of eight will line up for the third and final leg of the Triple Crown, the 154th running of the $1.5 million Belmont Stakes (G1) presented by NYRA Bets on Saturday at Belmont Park.

Contested over a stamina-testing 1 1/2-mile distance, Belmont Park’s apex affair was inaugurated in 1867 with filly Ruthless capturing its first running. Throughout the past century-and-a-half, 38 horses have captured the “Test of the Champion” en route to Hall of Fame induction, including 13 Triple Crown winners. 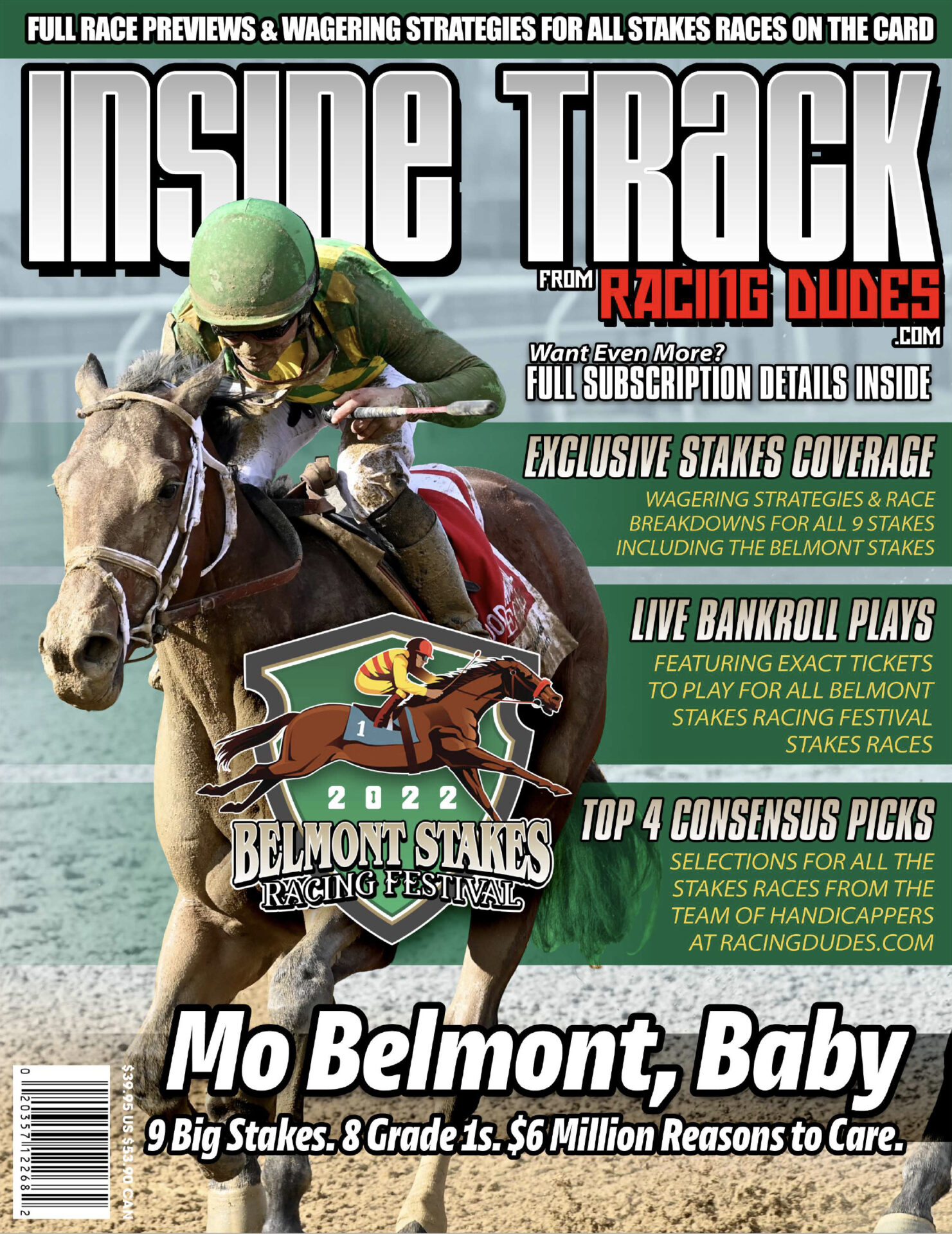 Inside Track to the 2022 Belmont Stakes Racing Festival

Be the first to grab our upcoming MONSTER wagering guide to the 2022 Belmont Stakes Racing Festival! Features 9 graded stakes (8 Grade 1s) worth nearly $6 million in purses!

This year, Grade 1 Kentucky Derby winner Rich Strike will attempt to back up his memorable 80-1 upset in the “Run for the Roses”. Owned by Rick Dawson’s RED-TR Racing and trained by Eric Reed, the Keen Ice chestnut drew into the Derby off the also-eligible list upon the scratching of Ethereal Road.

Rich Strike broke from the outermost post in the 20-horse field under jockey Sonny Leon, taking back 17 lengths off a torrid pace set by Summer Is Tomorrow. He was in 15th position at the third-to-last point of call before weaving his way through traffic in the stretch drive to collar Epicenter and Zandon in the final strides and score the second largest upset in the Derby’s 148-year history.

Rich Strike’s rise to the occasion was an atypical one for a Kentucky Derby winner. Claimed for $30,000 in September out of a 17 1/4-length maiden win at Churchill Downs, Rich Strike spent his winter at Turfway Park racing over a synthetic surface and finished third in the one-mile Leonatus on January 22 in his 3-year-old debut. Following a fourth in the John Battaglia on March 5, he finished a late-rallying third in the Grade 3 Jeff Ruby Steaks on April 2, earning enough points to be on the cusp of getting into the Kentucky Derby starting gate.

Reed recalled several horses dropping out and deciding to opt back into the race in the weeks leading up to the Derby before Rich Strike drew in as an also-eligible.

“That was a yo-yo because we knew we had 21 points,” Reed said. “At one point we were No. 22 and then we were down to No. 24. A couple dropped off the trail which got us back to No. 22. Classic Causeway came back in, Un Ojo was out, Chad [Brown] decided not to run Early Voting, so we were back to 21 again. It looked like that was it, but Mr. Lukas ended up scratching his horse [Ethereal Road] and it allowed us to win the Derby.”

Rich Strike has acclimated well to his new surroundings since arriving at Belmont last Wednesday. Reed described Rich Strike as one that thrives off routine.

“If you break his schedule, he’s not happy, and we had to change it a little bit coming here by going out a little bit later, but he likes that,” Reed said. “He takes a nap every day between 6:30 and 7:30 while we get ready for him to go out to the track and then he’s all business. When he comes back, he’ll eat a little bit and then lay down for another hour and a half.”

Rich Strike, listed at 7-2 on the morning-line, will exit post 4 with Leon aboard.

The Belmont Stakes has seen eight horses capture the Grade 3 Peter Pan en route to a Belmont score. This year, WinStar Farm, CMNWLTH, Siena Farm and Bobby Flay’s We the People, installed as the 2-1 morning-line favorite, will look to add to that number following an emphatic 10 1/4-length win in the traditional local prep for the Belmont on May 14.

The son of Constitution, who sired 2020 Belmont winner Tiz the Law, broke swiftly in the nine-furlong Peter Pan and never looked back, crossing the wire over the good and sealed track under a hand ride by Flavien Prat. We the People earned a field-best 103 Beyer Speed Figure for the effort.

A three-time winner of four career starts, We the People displayed two-turn brilliance at Oaklawn Park earlier this year at maiden and allowance level in his first pair of starts, capturing both by at least five lengths. He ran an uncharacteristic seventh in the Grade 1 Arkansas Derby, where he was wide around the first turn and came up empty.

We the People has remained at Belmont since his Peter Pan coup under the watchful eye of trainer Rodolphe Brisset, who guided the colt through a half-mile work in 47.59 on June 4 over Big Sandy.

“The way he has been acting is what you want to see,” said Brisset, who will be saddling his first Belmont Stakes contender. “The way he has changed is really good. When you let him breeze and he breezes that good, it’s all a good sign.”

Hall of Famer Todd Pletcher will saddle accomplished contenders Mo Donegal [5-2 ML] and Nest [8-1 ML] in pursuit of his fourth Belmont Stakes win, which would put him on even terms with Max Hirsch, R. Wyndham Walden and D. Wayne Lukas.

“They’ve both trained super,” Pletcher said. “Both have trained here and breezed together all three times and I’m really excited about the way they’re coming into it and the way they came out of their last breezes.”

Donegal Racing and Repole Stable’s Mo Donegal was fifth in the Grade 1 Kentucky Derby, where he made up 17 lengths from second-to-last. Mo Donegal rallied wide around the turn, closing in tandem with Barber Road to his outside to finish 3 3/4 lengths behind Rich Strike.

Mo Donegal, a two-time graded stakes winner in New York, was a tough customer in the Grade 2 Remsen in December at Aqueduct to defeat eventual Grade 1-winner Zandon. Following a slow-breaking third in the Grade 3 Holy Bull two months later at Gulfstream Park, he returned to New York on a winning note by running down subsequent Preakness winner Early Voting in the Grade 2 Wood Memorial presented by Resorts World Casino at Aqueduct.

A victory in the Belmont would make Mo Donegal the first horse to capture the Wood Memorial and Belmont Stakes since Empire Maker in 2003.

“We never take anything for granted, hopefully we work out a good trip,” Pletcher said. “The last time in the Derby, he just hopped away from there. Hopefully, he gets away cleanly and hopefully doesn’t compromise his chances with a poor start.”

Irad Ortiz, Jr., who won the 2016 Belmont Stakes with Creator, retains the mount from post 6.

Pletcher’s other entrant Nest will take on the boys and attempt to become the fourth female in history to capture the “Test of the Champion,” joining Ruthless, Tanya [1905] and the Pletcher-trained Rags to Riches [2007].

Owned by Repole Stable, Eclipse Thoroughbred Partners and Michael House, Nest comes into the Belmont off a late-closing second to Secret Oath in the Grade 1 Kentucky Oaks on May 6 at Churchill Downs. Never off the board in six lifetime starts, Nest won her first two starts this year by open lengths, capturing the Suncoast at Tampa Bay Downs in February by six lengths before an 8 1/4-length romp in the Grade 1 Ashland on April 8 at Keeneland.

“She’s trained super. She’s done everything that we’ve asked her to do as far as breezes and gallops are concerned. She’s given us every indication that she’s ready to go,” Pletcher said. “She’s a strong galloper and she’s got super stamina, so we nominated for the Triple Crown back in January because we’ve had this type of race in mind for her. She has a strong pedigree for it and a lot of ability.”

Nest is by prolific sire Curlin, who produced 2013 Belmont Stakes winner Palace Malice, and out of graded stakes-winner Marion Ravenwood, whose breed-shaping sire A.P. Indy registered the second fastest time on record in the 1992 Belmont.

Jose Ortiz, who piloted Pletcher-trained and Eclipse-owned 2017 Belmont winner Tapwrit, will eye his second victory in the historic race when piloting Nest from post 3.

Barber Road [10-1 ML] arrives at the Belmont off a late-closing sixth in the Kentucky Derby. The gray son of Race Day was last-of-20 at the first point of call and was 11 lengths wide at the top of the stretch, but managed to make up considerable ground to finish 4 3/4 lengths behind Rich Strike.

While still striving for a stakes win, Barber Road made a good account of himself on the Derby trail at Oaklawn with runner-up placings in the Grade 1 Arkansas Derby, Grade 3 Southwest and Grade 3 Smarty Jones, while finishing a close third in the Grade 2 Rebel.

Twenty years after saddling Sarava to the largest upset win in Belmont Stakes history, trainer Kenny McPeek chases a second Belmont Stakes win with Fern Circle Stables, Back Racing, and Magdalena Racing’s Creative Minister [6-1 ML]. The Creative Cause gray notched two-turn victories at Keeneland and Churchill ahead of a third-place finish in the Preakness.

“He needed to move forward, and he did in that race [Preakness],” McPeek said. “He’s been a horse who has handled whatever level we’ve taken him to. Good horses do that. It seems like if he can step forward one more time, he’s right there.”

Hall of Famer Mark Casse, who saddled Sir Winston to an upset Belmont Stakes score in 2019, sends out Golden Glider [20-1 ML] in pursuit of his second Belmont win.

The Ghostzapper chestnut was off-the-board in a trio of graded starts on the Kentucky Derby trail in the Grade 3 Sam F. Davis [5th], Grade 2 Tampa Bay Derby [4th] and Grade 1 Blue Grass [4th].

He finished a distant second last out to returning rival We the People in the nine-furlong Grade 3 Peter Pan on May 14 in the traditional local prep for the Belmont Stakes. The top-two finishers of the Peter Pan had their Belmont Stakes entry and starting fees waived.

Owned by Gary Barber, Manfred Conrad and Penny Conrad, Golden Glider is following a similar path to Sir Winston, who also graduated at Woodbine and competed in the Tampa Bay Derby [5th] and Blue Grass [7th] before earning a free berth in the Belmont via the Peter Pan [2nd].

Daniel Alonso’s Skippylongstocking [20-1 ML] is the most seasoned horse in the Belmont Stakes field with 10 career starts. The Saffie Joseph, Jr.-trained son of Exaggerator arrives off a fifth in the Preakness and was previously third in the Wood Memorial.

“I thought he ran decent in the Preakness. He was a little wide in the first bend, but he ran his race,” said Joseph, Jr., who seeks his first win in a Triple Crown race. “He’s a trier and he needs things to work out for him to get a piece of it. It’s racing and you have to take a chance. We think he deserves to take a chance off his Preakness run, especially with the top two not coming back.”

Manny Franco, who rode Tiz the Law to victory in the 2020 Belmont, will ride from post 2.

The Magic Mike Show 395: What We Learned [Saratoga, Del Mar]

Life Is Good HOLDS ON LATE, But Is His Classic Ability Questionable? | 2022 Whitney Stakes Replay & Reaction