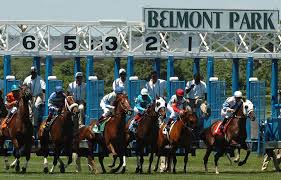 Analysis: For me, this one boils down to a three-horse rematch of this years Whitney Stakes at Saratoga. RON THE GREEK got a horribly wide trip in that race when finishing a close second.  Look for him to get a better trip in this one, and that coupled with the extra distance will make him dangerous.  FORT LARNED was the winner of  the Whitney, and is probably the deserving favorite.  He’s put two really solid wins together.  FLAT OUT won this race last year, and may be coming into this years contest better than ever.  You have to also like the face that Joel Rosario has signed on to ride.

Analysis: Wow, where do I even begin.  I’ve ranked my top three horses,  but this race is about as tough as any you will see.  I’ll just run down the field from top to bottom as all these deserve a few words said about them.  DREAM PEACE finished a strong second to Winter Memories last time out, and the added distance of this race might do her a lot of good.  HESSONITE has won three straight races, but this is a major class jump.  HIT IT RICH is a three-time Grade 3 winner, including last time out when she won the Glens Falls Stakes at Saratoga.  I’M A DREAMER won the Grade 1 Beverly D Stakes at Arlington last time out.  STARFORMER will be taking a major class jump, but does boast a Grade 3 win at Delaware to her credit.  BIZZY CAROLINE is a multiple Grade 3 winner, and finished second to Hit it Rich last time out.  ZAGORA was one of the most impressive grass winners of the year last time out in the Grade 1 Ballston Spa Stakes at Saratoga.  NAHRAIN finished second in last years Breeders Cup Filly and Mare Turf, and could be using this race as a prep for the Breeders Cup once again.  Finally, HALO DOLLY is a winner of thirteen races, including a Grade 2 win at Del Mar last time out.

Analysis:It’s pretty hard to go against POINT OF ENTRY considering his winning streak, as well as his big Grade 1 victory last time out.  LITTLE MIKE is exiting a Grade 1 victory of his own.  Both of these horses won those races on the same day, so this really will be a battle between the Sword Dancer and Arlington Million winners!  TREASURE BEACH hasn’t found his stride this year in the United States, but I’m willing to give him one more chance before I totally throw him out.

Analysis: The rumors were flying that SHACKLEFORD was done for after a terrible Saratoga race and workout, followed by an illness shortly after.  Those rumors have been put aside for now, as the colt has come back with a strong works since.  He’s the top pick going a mile until someone knocks him off.  TAPIZAR is worth taking a flyer on.  He’s going to enjoy this mile distance, and his natural early speed will work to his advantage.  TO HONOR AND SERVE finally woke up when winning the Woodward last time out, and is also a horse that runs well at a mile.  Any of these three could jump up and win this thing.

Analysis:IT’S TRICKY will probably be the popular pick here because of her terrible stumble in her last race.  Despite the stumble she was still competitive against a solid Grade 1 field.  However, ROYAL DELTA will be my top selection.  She was clearly not at her best last time out, and when she’s on her best she can beat anyone in the country.  She should enjoy the long Belmont stretch.  DISPOSABLEPLEASURE will be facing older horses for the first time.  I’ve liked her consistency this year, but she should probably only be used in exotics.  Not sure she’s good enough to win.

Analysis:It’s time for JUSTIN PHILLIP to win one of these, and I feel like this is the spot where he’s going to do it.  His works leading up to the race are solid, and quite frankly I think he’s the best horse in the race.  CAIXA ELECTRONICA is always solid, and should run better now that Saratoga is over.  For some reason he just doesn’t run quite as well on that surface.  FORT LOUDON will be facing older horses for the first.  He’s had success sprinting against other three-year olds this year, and to me he looks very well prepared to take on this new challenge.

Dudes Who Bet Sports 116: Did the Committee Get it RIGHT?

How I Learned To BET HORSE RACING Successfully! | Expert Tips To Help Improve Your Handicapping!