Aaron previews the 2022 Remsen Stakes (G2) from Aqueduct, then gives his top picks & long shots from this early major prep race for the 2023 Kentucky Derby (G1). Trainer John Servis entered stakes champion Tuskegee Airmen, who puts his undefeated streak on the line against a host of early Kentucky Derby Trail dreamers. Tell us YOUR thoughts in the Comments section! 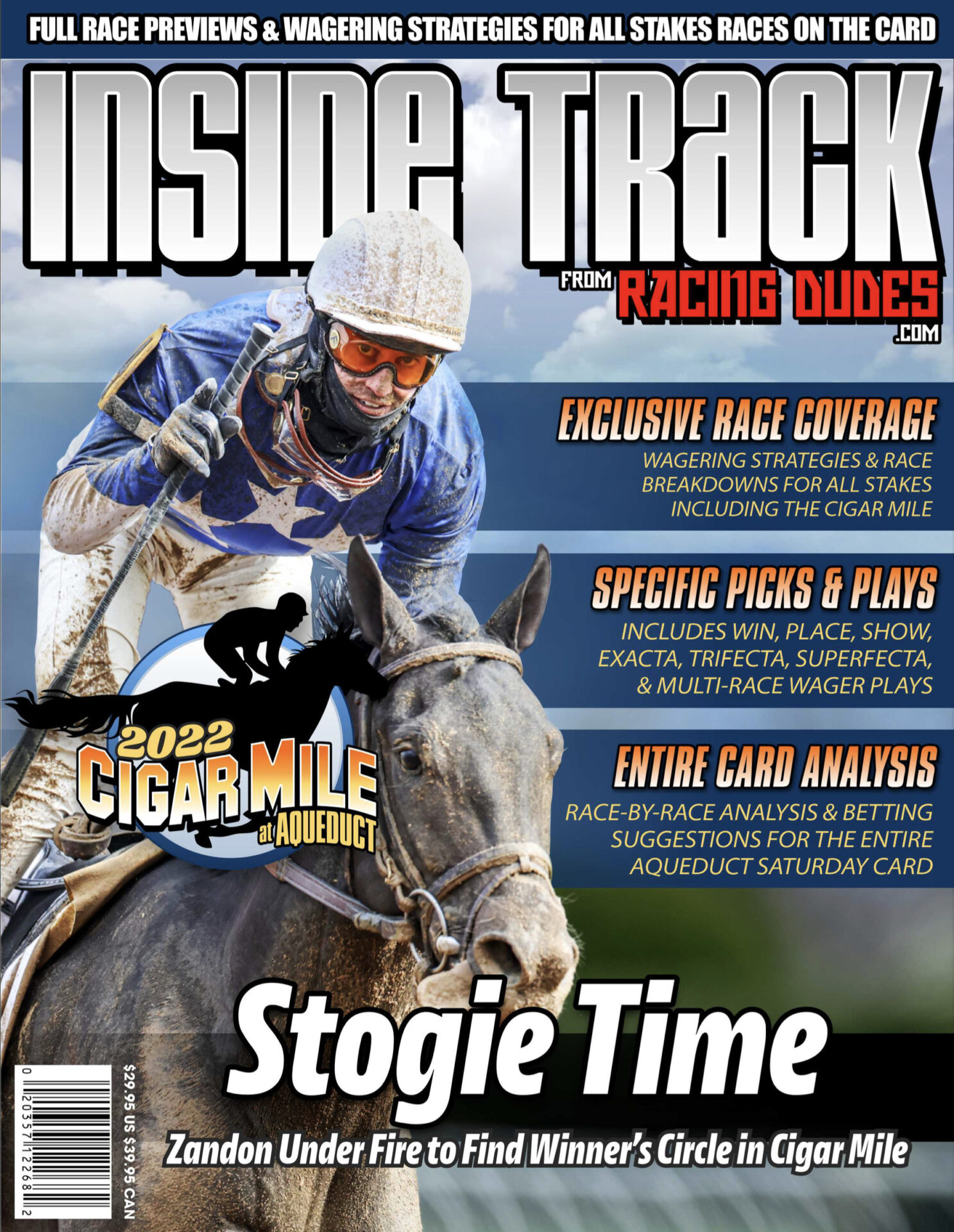 Inside Track to the 2022 Cigar Mile

Download our MASSIVE 11-page Inside Track to the 2022 Cigar Mile wagering guide! Features picks and analysis for 4 stakes, including the $750,000 Cigar Mile Handicap (G1).

Tuskegee Airmen, a bay son of Street Sense, enters from an impressive 3 1/4-length score in the one-mile Rocky Run on October 15 at Delaware Park where he showed a strong turn of foot under Paco Lopez to secure his first stakes win. Tuskegee Airmen broke outwardly from post 5-of-6 and tracked in fourth behind the pace set by fellow Remsen aspirant Midnight Trouble through the first three-quarters. He appeared well-beaten as the field rounded the final turn, but the bay colt had something left under urging from Lopez and ducked down to the rail for the drive to the wire and persevered in a final time of 1:37.74.

“Mentally, the light hasn’t gone on yet, but he has flashed some talent,” said Servis. “We are excited about him. His last race at the three-eighths pole, I didn’t think he was going to beat a horse. He dropped back under a drive and it looked like he was finished and all of a sudden, he went back to running again. We’re letting him bring himself along at his pace. He’s doing it all on raw talent and the sky is the limit.”

The victory came three weeks after a dominant debut score sprinting seven furlongs in stalking fashion at Parx. He closed from eighth-of-14 under Luis Saez to post the 5 1/2-length victory over next-out winner Didinger.

Tuskegee Airmen is out of the Medaglia d’Oro mare Lucky Cover, a half-sister to multiple graded stakes-placed Team Colors and stakes-winner Team of Teams. His second dam, Teammate, was a dual Grade 2-winner and is a half-sister to graded stakes-winner and leading sire War Front. Tuskegee Airmen was purchased for $290,000 at the Fasig-Tipton Kentucky Fall Yearling Sale.

“He’ll run all day. He’s a big, strong horse,” said Servis. “Ironically enough, I was actually the underbidder on him for another client, and then ended up getting him in my barn and I was really happy about that.”

Chester and Mary Broman’s New York homebred Arctic Arrogance, a grey son of Frosted, enters from a dominant victory over returning rival Quick to Accuse in the state-bred Sleepy Hollow on October 30 at Belmont at the Big A for trainer Linda Rice.

﻿Ridden to victory by Jose Lezcano, Arctic Arrogance made the early lead and was briefly headed by Starquist at the three-quarters call, but kicked clear at the top of the stretch and drew away to a 4 1/2-length score, stopping the clock in 1:37.90. The effort was awarded an 80 Beyer Speed Figure.

“We had a hard time getting him to leave the gate and he was a difficult gate horse,” said Rice, who won the 1996 Remsen with The Silver Move. “After that, he’s been a horse who wants to be heavy, and between races I was able to get more works into him. He’s in very good shape in regards to that right now.”

The Sleepy Hollow came on the heels of Arctic Arrogance’s lone loss in three career outings when runner-up to longshot winner Jackson Heights in the state-bred Bertram F. Bongard sprinting seven furlongs in September at Belmont at the Big A. There, he set the tempo to the top of the stretch under Lezcano, but was collared at the sixteenth pole by Jackson Heights and settled for second two lengths back.

Arctic Arrogance, whose other start was a debut pacesetting victory on September 5 at Saratoga, has been assigned post 4 with Lezcano aboard.

Rupp Racing’s New York-bred Quick to Accuse will also make his first start outside state-bred company after finishing second to Arctic Arrogance in the Sleepy Hollow for conditioner Horacio De Paz. There, he rallied from fifth-of-10 to make up considerable ground under regular pilot Manny Franco, but could not catch the runaway winner.

De Paz said he is hopeful Quick to Accuse, who is a half-brother to multiple stakes-winning and graded stakes-placed New York-bred Mr. Buff, will relish two turns.

“I think the two-turns will be easier for him, but we won’t know for sure until we try him,” said De Paz.

The bay colt was a dominant winner at second asking, posting a visually impressive 9 3/4-length victory in a one-mile state-bred maiden special weight on October 7 at Belmont at the Big A in gate-to-wire fashion. That effort came on the heels of a debut fourth-place finish sprinting seven furlongs over a sloppy and sealed main track in August at Saratoga Race Course.

“He’s not as stout as Mr. Buff, but he’s a good-sized horse. He needed his first race and came back and won nice second time out,” De Paz said. “We tried him in the stake and that was a good field of horses to test him against and I was happy with his efforts. He got a little antsy in the gate. This looks like a logical spot.”

Graded stakes-placed Prove Right enters as the most seasoned horse in the field for trainer James Chapman, who co-owns the Justify colt with Stuart Tsujimoto. Prove Right was last seen finishing a close third 2 1/4 lengths behind the victorious Champions Dream in the Grade 3 Nashua on November 6 at the Big A. He set the pace in the one-mile test but was collared by the winner and runner-up Full Moon Madness in the stretch, finishing eight lengths ahead of fourth-place American Speed.

Prove Right graduated at second asking in June at Churchill Downs and is still in search of his first victory against winners after he crossed the finish line first in a half-mile optional claimer in August at Timonium, but was disqualified and placed third. The Remsen will be his ninth lifetime start and second outing beyond sprint distances.

Jose Gomez has been tasked with the ride from post 3.