Aaron previews the 2022 Malibu Stakes (G1) from Santa Anita, then gives his top picks & long shots from this important Grade 1 race. The Bob Baffert trained Taiba looks for his third Grade 1 victory of the year, which could make him the 3-year-old Horse of the Year. Will the Baffert trained horse get the job done? If so, does that make him 3-year-old of the year? Tell us YOUR thoughts in the Comments section!

SMASH THE *THUMBS UP* ~ HIT *SUBSCRIBE* ~ RING THE *NOTIFICATION* BELL

Most recently third in the Grade I Breeders’ Cup Classic, finishing 8 ¾ lengths behind presumptive Horse of the Year Flightline, Taiba, who took the Grade I Pennsylvania Derby two starts back on Sept. 24, will be seeking to become the only 3-year-old colt or gelding to win three Grade I wins on the year and will thus try to make a late case for an Eclipse Award as top 3-year-old Male.

A $1.7 million purchase out of a 2-year-old in training sale in March of last year, Taiba is owned by Zedan Racing Stables, Inc. and will be ridden by Mike Smith, who has been aboard for his last five races, all of which have been around two turns.

A first-out winner here going six furlongs under John Velazquez on March 5, Taiba attended the early pace and won the Santa Anita Derby April 9 in only his second career start.

Baffert, who will also be sending out multiple graded stakes winner Messier, will be seeking his fifth win in the prestigious Malibu, which was taken last year by presumptive Horse of the Year Flightline.

A winner of both the Grade II San Vicente Stakes and the Grade II San Felipe here earlier this year, Richard Mandella’s Forbidden Kingdom was subsequently dispatched as the even money favorite in the Grade I Runhappy Santa Anita Derby on April 9, but he went to the sidelines after finishing sixth and last.

Off at even money in his comeback race, the Grade II Santa Anita Sprint Championship Oct. 1, Forbidden Kingdom showed the way to the top of the lane but tired to finish fifth, beaten 3 ¾ lengths. Most recently third, beaten a half length in a six furlong allowance at Del Mar, Forbidden Kingdom will try to stop a three-game skid as he seeks his first Grade I win. 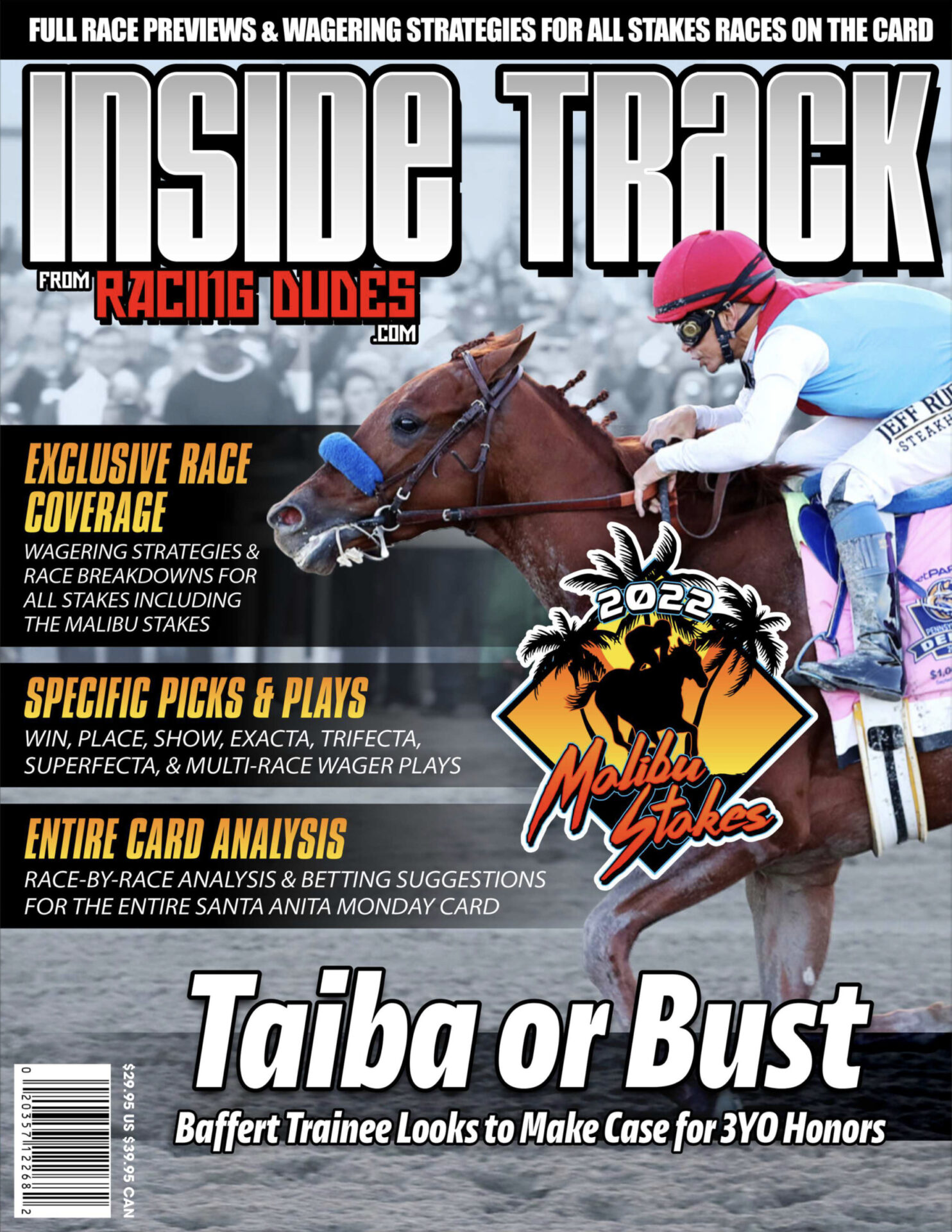 Inside Track to the 2022 Malibu Stakes

Download our MASSIVE 13-page Inside Track to the 2022 Malibu Stakes wagering guide! Features picks and analysis for SIX stakes, including the $300,000 RUNHAPPY Malibu Stakes (G1).

A chestnut colt by 2015 Triple Crown winner American Pharoah, Forbidden Kingdom is owned by MyRacehorse and Spendthrift Farm, LLC. Ridden by Juan Hernandez in all eight of his starts, he has three wins, a second and two thirds.

Trainer Wesley Ward looms dangerous in the Malibu with Kentucky shipper Nakatomi, who comes off a big allowance win going 6 ½ furlongs at Keeneland Nov. 5. A chestnut gelding by Firing Line, Nakatomi will be ridden back by Tyler Gaffalione. Owned by Bottle Rocket Stable, Qatar Racing Limited and Marc Detampel, Nakatomi, who is 8-4-1-1 overall, will be trying seven panels for the first time.

With Flavien Prat climbing aboard for the first time, the Dallas Stewart-trained Strava also rates a big chance on Monday shipping in from New Orleans. A big 6 ½ length allowance winner going a one-turn mile in the Churchill Downs slop Nov. 27, Strava, who was off the board in his only graded stakes try this year, earned a lofty 98 Beyer Speed Figure on Nov. 27 and looks to be a now commodity.

Special early first post time for an 11-race card that includes six graded stakes on opening day is at 11 a.m., with admission gates opening at 9 a.m.